May 2020 I Research Article
By Fabian Sivnert, Co-Founder and Head of Analytics at ANCORED

Effective communications in a crisis determine institutional reputation long after the emergency is over. The pandemic COVID-19 provides communications professionals with an exceptional opportunity to compare and contrast how organisations have responded. This article aims at introducing and exploring our initial social media findings on how one sector of society managed their crisis communications - the response of American universities announcing their campus closure in the face of the virus and transition to virtual teaching. The article will explore our aggregated data collected from Facebook and Twitter using ANCORED Intelligence.

COVID-19 – the infectious disease caused by SARS-CoV-2 or more commonly known as the corona virus – is a global crisis for which the world was not prepared. How companies, organizations and universities deal with it will define their future.

Today and tomorrow there will be bad news to convey in relation to COVID-19. Tough choices to make, hard decisions to take. That cannot be avoided. But we can control how we communicate – and that has the potential to transform reputations for good or ill. As our findings will reveal, there are clear winners and losers.

Facebook and Twitter provide a rich source of qualitative and quantitative data which can be used to accurately and effectively gauge public perception towards a variety of different issues. The universities analysed have all communicated their campus evacuation and transition to virtual teaching via both Facebook and Twitter, making them appropriate for comparative studies. Universities analysed in this article are: Harvard University, Yale University, Princeton University, Columbia University, New York University, and Brown University. The selected institutions included in this article represent some of the most well-known universities in the United States and internationally.

As both Twitter and Facebook have similar comment functions, we have decided to use comments as the primary way to gauge the audiences’ perception towards COVID-19. Both Facebook and Twitter have a “like” function, however, Twitter does not have a clear “dislike” function: this makes effectively and accurately gauging public perception difficult if we limit ourselves to interactive functions such as “likes”, “loves” or “anger”. So, rather than focusing on likes and similar interactive functions we have decided to explore comments. According to the study The Psychology of Sharing, 85 percent of Social Media users believe that reading comments and responses from others helps process information and determine our own view of the issues; comments are therefore an invaluable and important aspect to study when attempting to measure the impact of communication – especially crisis communication.

For this study, we have been collecting data on Facebook and Twitter using our proprietary analytics tool known as ANCORED Intelligence. Using ANCORED Intelligence we have collected and analysed more than 10,000 publicly available data points on Social Media from 10/03/2020 to 31/03/2020. In order to provide enough data points for each university it was sometimes necessary to extract data from multiple posts on both Facebook and Twitter; it is important to note that if more than one post was used to gather data, each of those posts were exclusively addressing COVID-19 and the closure of the campus and residential halls and transition to virtual teaching.

Each of the comments have been processed by ANCORED Intelligence and one or more human decoders and have been categorised as either “positive”, “negative”, “neutral” or “information”. The following typology explains our content classification:

To ensure that we provide an accurate and fair comparison between each university it was important to view comments – especially the four different categories – as a percentage of the total amount of comments. According to Figure 1, New York University (NYU) has by far the highest proportion of negative comments (74 percent). The proportion of negative comments among other universities ranged between 7–39 percent with an average of 29 percent. Positive comments on the other hand ranged from 5–30 percent with an average of 17 percent. 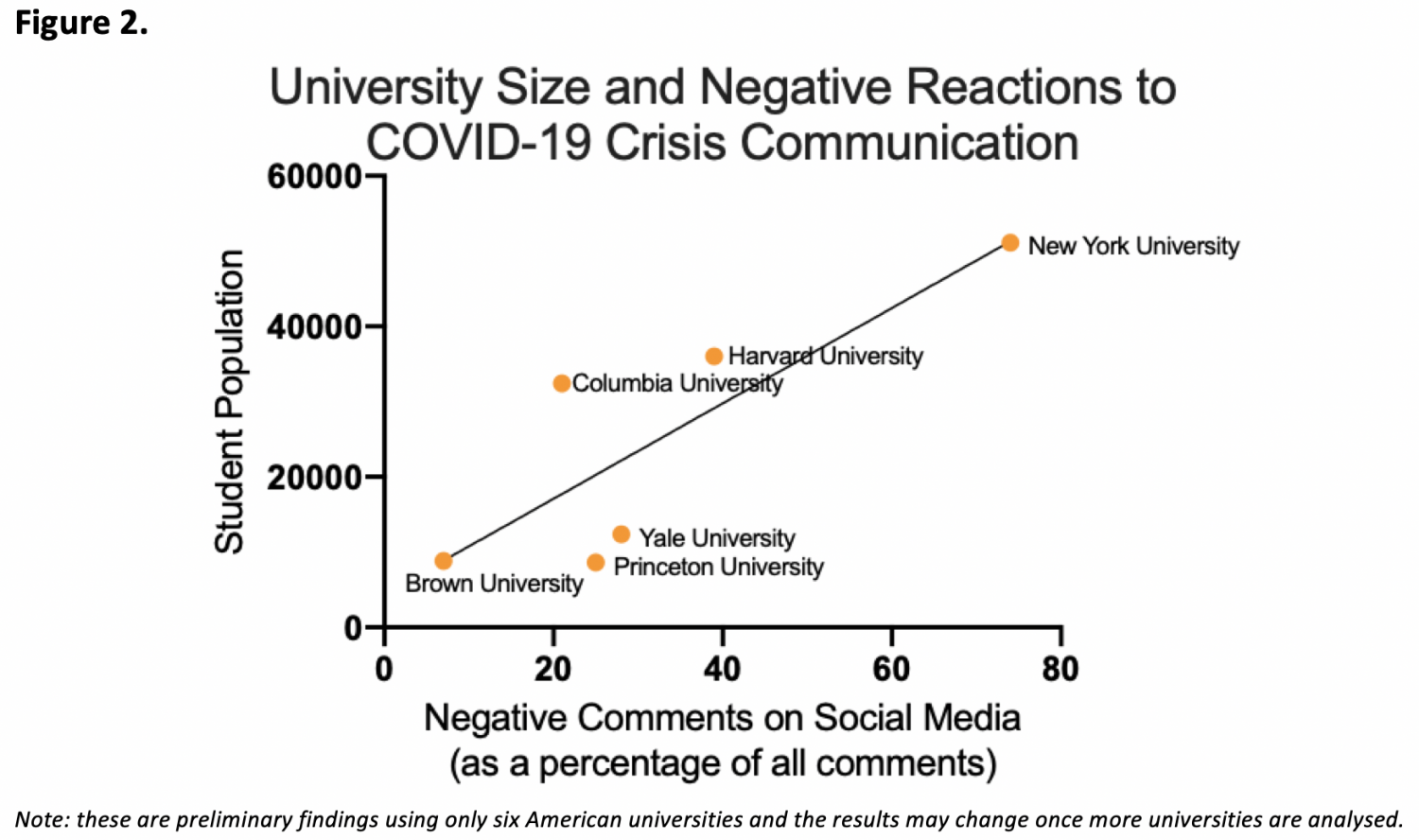 Based on the quantitative analysis of the six universities listed above there are clear winners and losers. In particular, NYU had the largest proportion of negative comments and the lowest proportion of positive comments whereas Harvard University, Yale University, Princeton University, Columbia University and Brown University had roughly four times the number of positive comments. Given that the COVID-19 crisis is widespread and affecting all universities across the globe, future studies should pay close attention to application numbers, alumni donations and similar quantifiable assessments to fully understand how the successful or unsuccessful crisis communication have affected universities.

This quantitative analysis provides us with an initial understanding of how universities’ crisis communication has been received on Facebook and Twitter. However, it is still too soon to assess how this will affect universities long-term.

In times of crisis, two key ingredients to a successful crisis communication are empathy and understanding

For the qualitative study, we focused on the official communication announcements accompanying a social media post on either Facebook and Twitter. In order to provide a nuanced analysis, it was sometimes necessary to extract samples from multiple announcements, however it is important to note that each of the announcements were exclusively addressing COVID-19 and the closure of the campus and residential halls as well as transitioning to virtual teaching.

Based on our preliminary quantitative analysis presented in Figure 1, NYU stands as the university with the highest proportion of negative comments (74 percent) and the lowest proportion of positive comments (5 percent) thus making their unsuccessful crisis communication particularly attention-grabbing. Some of the most discussed or disliked comments on social media for NYU were:

“This [closing student residential halls] seems not well thought or does not show the health of NYU students is a priority at all. I’m freaking out!” – reaction to NYU’s crisis communication

“This [closing student residential halls] is absurd. The US government and the State of NY are telling the entire country to shelter in place and not travel. You are telling us to come back into the city at this extremely risky time to pack and move boxes? That is insane […]” – reaction to NYU’s crisis communication

“We are implementing a number of additional actions to keep the NYU community healthy and to contribute to checking the spread of the coronavirus.”

“All students […] unless granted an exception for extraordinary circumstances, must leave their rooms in NYU housing by no later than next Sunday, March 22; we strongly urge students to leave earlier if possible. Virtually all dining facilities will also close as of that date.”

“We recognize that there may be some students who have exceptional reasons that require them to stay in New York. Those seeking exceptions -- and the bar will be high -- should complete this survey in order to be considered for an exception.”

“This semester has been unprecedented in so many ways. I think we all recognize that the challenges we are confronting will not be surmounted in some small number of days, but neither will they linger forever […] All of you are in my thoughts. Thanks for your flexibility and your grit. Stay safe and healthy. The University will be back in touch soon again”.

Clearly, NYU are not averse to using sympathetic language in their crisis communication announcements. Yet, in times of crisis one should lead with empathy, not end with it.

Other well-known American universities such as Princeton, Yale and Columbia, have, in contrast to NYU, been more careful to include a more sympathetic and empathetic tone in their crisis communication

After reviewing multiple announcements from the NYU related to COVID-19 we determined that their standard crisis communication structure appears to be: (1) announcing that more actions related to COVID-19 will be implemented, (2) what those actions are and how they will be implemented, and (3) concluding remarks by NYU’s president expressing empathy for the situation.

Other well-known American universities such as Princeton, Yale and Columbia, have, in contrast to NYU, been more careful to include a more sympathetic and empathetic tone in their crisis communication – and have received much higher proportions of positive comments and lower proportions of negative comments on social media. For example, Princeton writes the following in their crisis communication urging all students to remain off campus and transitioning to virtual teaching:

“We’ve all had a very tumultuous week, as the news about COVID-19 changes moment by moment. We appreciate your patience as we’ve worked diligently and carefully to make decisions and arrangements to address the impact of this international public health crisis on our campus. This unprecedented situation forces us to guide campus behaviour by making tough calls on a daily basis, which must then be refined as we gather more information each hour from public health officials.”

“But our number one goal during this crisis is to ensure the health and safety of our students and community.  We know that these policies will cause serious disruptions. We’ll continue to work with you and our faculty and staff to mitigate the impact of these necessary public health decisions.”

Based on our collected data, this type of sympathetic and empathetic language creates a different response from the social media audience compared to NYU’s. Some of the most discussed or liked comments on social media for Princeton were:

“Thank you Princeton for your tireless efforts in dealing with this crisis. You have put a thoughtful and generous plan in place and seem to be doing you best to accommodate everyone as much as possible.” – reaction to Princeton’s crisis communication

“Thank you Princeton, so very much for your thorough, thoughtful actions. Bravo 👏🏻 🧡🖤🐯.” – reaction to Princeton’s crisis communication

Our data suggest that two of the contributing reasons to why Princeton experienced greater social media approval compared to NYU are (1) their sympathetic tone and (2) the structure. Princeton includes more sympathetic language throughout their crisis communication whereas NYU use professional and unemotional language to inform the audience of necessary changes – and only emphasized sympathetic language in the final paragraph.

When exploring the response universities have received on Facebook and Twitter after announcing closing down residential halls and their transition from traditional to virtual teaching, our initial findings suggest that: (1) empathy, understanding and a personal voice are key ingredients for successful crisis communication, (2) universities should include sympathetic and empathetic language early in their crisis communication in order to set the right note from the start, (3) the structured sequence of communications should employ a consistent tone (4) social media comments are a double edged sword that can either aid or demolish reputations online, (5) universities (as other institutions) with larger student populations are proportionally more susceptible to higher levels of criticism on Social Media compared to smaller institutions, which exacerbates the negative effects of an impersonal and unsympathetic tenor of communication.

Fabian Sivnert is the Co-Founder and Head of Analytics at ANCORED and previously at the Department of Politics and International Relations at the University of Oxford.