January 2020 I Research Article
By Fabian Sivnert, Co-Founder and Head of Analytics at ANCORED

time heterogeneity is an important and unifying variable, bringing together previously incompatible theories on radical right electoral success and showing that they are in fact complimentary narratives

The reputational shield hypothesis developed by Elisabeth Ivarsflaten in 2006 states that in order for a radical right party to become electorally successful despite promoting anti-immigration policies they need a positive legacy to shield them from criticism for being racist, and this is achieved by consistently promoting other policies that are important to the electorate. Ivarsflaten argues that it is not the issue itself that determines whether a party promoting anti-immigration policies will be successful, but instead the credibility of the party. She bases her argument on the assumption that widespread social norms inhibit, or make voters reluctant, to vote for parties with racist or extremist reputations. However, she also argues that these social norms can be circumvented by parties with a positive legacy of promoting policies that do not have an anti-immigration sentiment. In other words, Ivarsflaten argues that the key to promoting anti-immigration policies is not the nature of the policies, but instead the credibility and perceived integrity of the party introducing them.

The countries used for the quantitative section in this research are limited to the those surveyed by the Chapel Hill Expert Survey (CHES) and include: Belgium, Denmark, Germany, Greece, Spain, France, Italy, the Netherlands, the United Kingdom, Portugal, Austria, Finland, Sweden, the Czech Republic, Estonia, Hungary, Poland, Slovakia, and Slovenia. Although the Chapel Hill Expert Survey also includes Bulgaria, Latvia, Lithuania, Romania, Croatia, Malta, Luxemburg, and Cyprus, these countries lacked complete information about stocks of foreign born population and social expenditure and were not included in the analysis.

Radical right parties from countries included in the CHES were examined, and needed to meet two main criteria qualify to for inclusion in the study: (a) be commonly identified in the literature as to belong to the radical right and (b) to have received a score of at least 7 out of 10 on position and saliency of immigration in the CHES. The vast majority of parties had scores of 8.5 and above for both position and saliency of immigration, whereas a few had scores just above 7. If a country had a score closer to 7 than 10 extensive additional research was carried out on those parties in order to identify sufficient evidence for their classification as having a radical right ideology.

The data used for this study is primarily gathered from the CHES which estimates party positioning on a variety of issues in Europe, and the issues addressed by the survey range from left-right economic positioning, integration, multiculturalism, and redistribution amongst others. The first CHES was conducted in 1999 and has collected data in several subsequent years, including 2002, 2006, 2010 and 2014. The key dependent variables used in this study were all sampled during 2006 and 2010, and are position on immigration, saliency on immigration, left-right economic positioning, redistribution, and position on democratic liberties. However, position on immigration and saliency on immigration were both excluded in the 2014 survey and, as a result, the quantitative section of this study will limit its focus to the 2006 and 2010 survey years which includes 24 European countries. Further, I am treating the survey year as the year when the experts submitted the survey, which is especially important as it then also takes into account the current affairs influencing the survey participants.

The aim of this study is to understand when radical right parties change their election strategies over time, with emphasis on election year dynamics

The aim of this study is to understand when radical right parties change their election strategies over time, with emphasis on election year dynamics. In order to test the sliding theory several mixed effect (ME) and fixed (FE) regression analyses were conducted. The ME model which is used in this study contains both fixed and random effects and allows for a wide range of distributions assuming there is a normal distribution of the random effects, making it an appropriate test for the analysis. The FE model on the other hand makes fundamentally different assumptions compared to the ME regression analysis, and instead assumes that the differences in observed effects are simply due to sampling error.

The results presented in Table 1 and 2 estimate the main effects and the interaction between radical right parties and other mainstream parties during election years and nonelection years given the dependant variables, and as listed previously the dependant variables used were position on immigration, saliency of immigration, left-right economic position, position on redistribution, or position on democratic freedoms and rights.

If the sliding theory is accurate, the regression analysis should find evidence of a consistent emphasis on the radical rights core issue of immigration, whilst also detecting a change in emphasis of non-core issues such as economic policies. 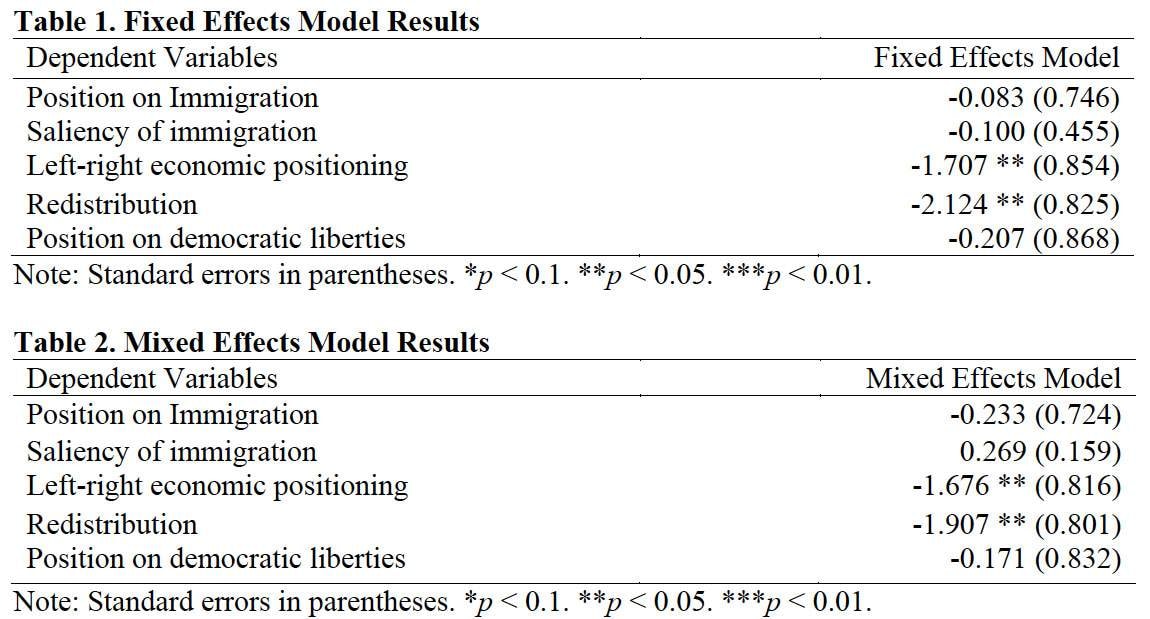 In summary, as a result of the regression analysis it is possible to conclude that radical right parties appear to consistently address anti-immigration issues. However, radical right parties also adjust their economic policies from more left/centrist positions during non-election years to more right/conservative economic positions during election years, which provides supporting evidence for the sliding theory. These results suggest that the radical right parties cannot manipulate core issues like immigration over time, but that they definitely adjust strategically their economic strategy by being economically more centrist during non-election years. This may be a way to enlarge their base without incurring in any cost during election years, especially when they cannot compete with issue ownership of other parties. At this point it is important to keep in mind that the measure of election year used in this study is exogenous, dependant of survey fieldwork by the CHES and therefore not subject to national conditions and variability.

Fabian Sivnert is the Co-Founder and Head of Analytics at ANCORED and previously at the Department of Politics and International Relations at the University of Oxford.